The Many Jobs of a Missionary ~ Exterminator, The Slithery Kind 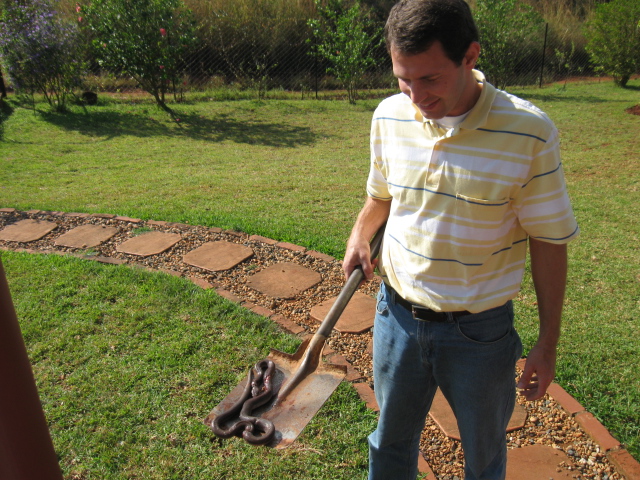 A snake we killed for our neighbor.

Oh, the enmity between the slippery serpent and humans since the beginning of time. When you think of rural missionary work, snakes and critters definitely make up part of the picture. We’ve killed our share of snakes around here. I’d say we average one for every year and a half?

Our favorite snake-killing story happened before I was even in SA. When we first moved here, we rented a small house on a Boer’s farm where my husband lived single for a year before I came. His neighbor, renting another house, called him over one night to help kill what he claimed was a Mozambican spitting cobra that had gotten under his sink. Seth will never forget this Afrikaner spewing out venom of his own, “I HATE snakes!” as he faced his sink with a 30-whatchamacallit shotgun.

“You’re not going to shoot at your sink, are you?” Seth asked disbelievingly. His neighbor repeated his feelings about snakes and then BAM! shot under his own sink. He hit the snake but didn’t completely kill it. They chopped off its head with a machete; but it’s mouth still opened and closed, hissing, for several minutes. Isn’t that creepy? 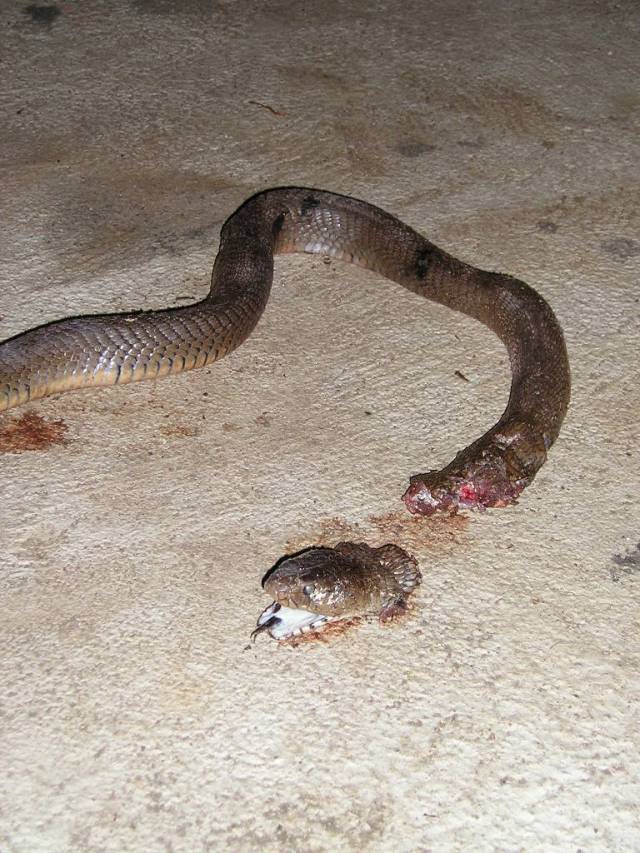 One time in youth group in Mashamba (the village we first worked in with a national pastor), a young girl came up to me and whispered, “There’s a snake in the roof.” Sure enough over a row of girls’ heads, a snake was resting in the rafters. I still remember Seth interrupting our teammate’s sermon with a calm whisper, then turning around with an attempt at a calming announcement, “Girls over here, please quietly move over to the other side. We need to kill a snake.”

Calm over! Pandemonium ensued. Screaming girls tripped over each other, rushing to the other side of the auditorium. It was funny in its unexpected disparity from my husband’s calm announcement.

I have even killed my own snake. (Can you hear the self-satisfaction in that line?) It was four inches long and a millimeter wide. 🙂 I could maybe make a toe ring out of it. I crushed it with my shoe and then a clothesline peg. (Maybe that gives a clue as to what I was doing when I found it!)

Snakes are an area for me to learn to increase my trust in the Lord for the safety of my children. It’s something that does no good to worry or imagine the possibilities of. 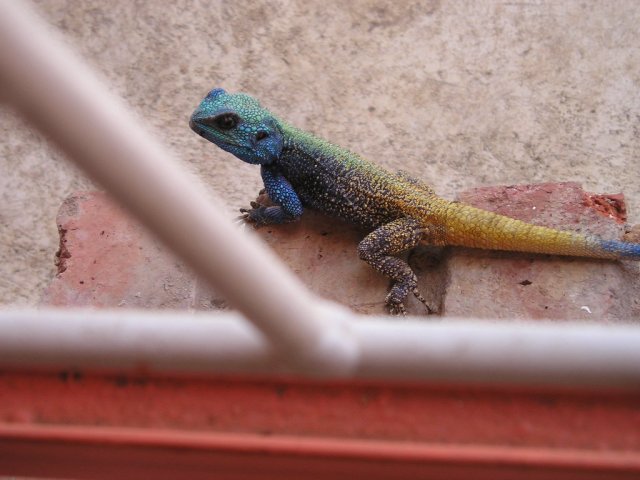 Here’s a pretty one.

I admit to a kind of critical spirit towards the Africans about lizards. I remember driving to youth group when we used to rent on the farm, and seeing up to four lizards running on the outside wall of a one-room house in the village, and thinking, “I will not allow lizards to take over my house like that.”

Since one of my two lone visits to the church outhouse in Mashamba involved a lizard dropping on my head (the other visit involved a spider), I have forever afterwards been slightly traumatized regarding outhouse usage (besides the usual stigma attached to outhouses!)

But now I don’t mind them. When we built our house in the village and began seeing them take up residence with us, we asked pest control how to exterminate them. They said it was illegal to kill them. We were shocked!

Now I appreciate them. They stay mostly in the roof or garage, or near the ceilings, and don’t usually come down to floor level, and certainly not in clothing or bedding or anything like that. And they eat other little bugs and critters. We’ve even gotten to see killings up close, as they sit on the outside of a window at night, creep up on a moth, and fast as lightning grab it in their mouths and gulp it down whole in a few convulsive swallows. Kinda gross, but I cheer them on. We even caught one to draw for nature study one day. 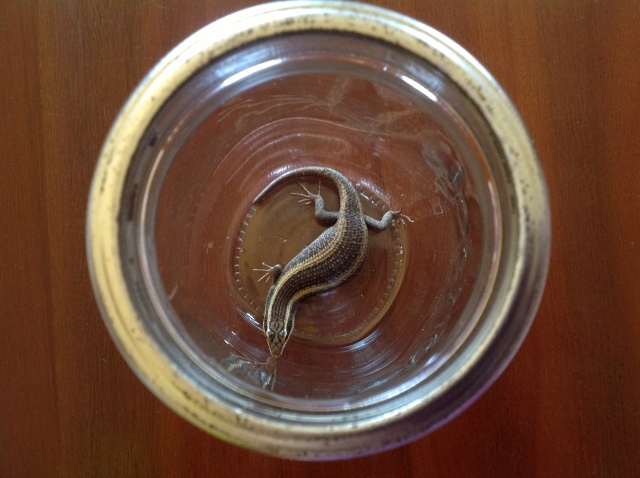 One interesting fact about lizards (this linked picture shows Colin holding a lizard with a blue tail!)–if you scare them, they’ll detach their tail and leave it slithering on by itself behind them as a defensive tactic while they run away. The predator goes for the tail, and the lizard gets away safe. But then they have no tail for a while until it grows back. 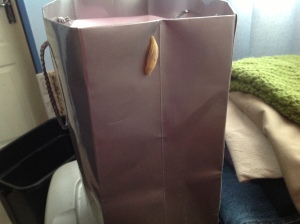 These weren’t so common until the recent rainy seasons we’ve had in which it rained so much that we had floods. I still remember our sole vacation to Durban, on the 14th floor of an apartment building, where slugs were on the toilets! I thought it was due to being right on the ocean, but it still surprises me that they were so high up in the building. We’ve also seen snails on our windows during really rainy times.

Slugs don’t bother me too much unless I accidentally touch them on a shoe or book I’m picking up in the kids’ room. That’s a *gag* moment.

Miscellaneous Other Slitherers and Crawlers 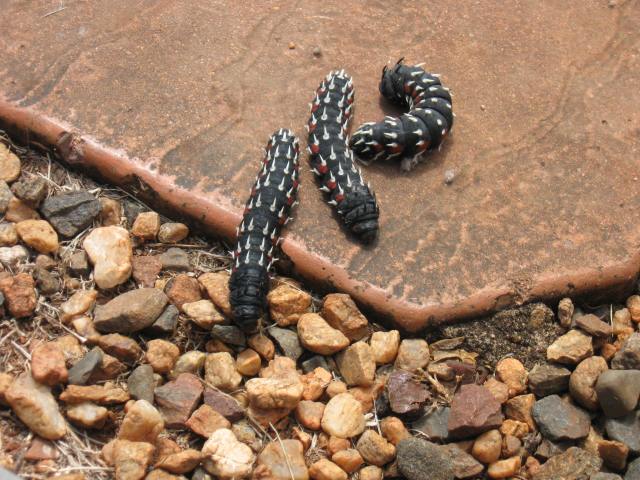 There are some really neat worms and caterpillars over here. Some the Africans eat– “meat,” they call them. The most famous is the “Mopane worm” which you can find fried up at street corners for a crunchy snack. I haven’t convinced myself to try those yet. Shudder.

The Africans will jump a few feet high in the air to get away from fuzzy, hairy caterpillars, however, if they see them. They make you ITCH if you touch them. 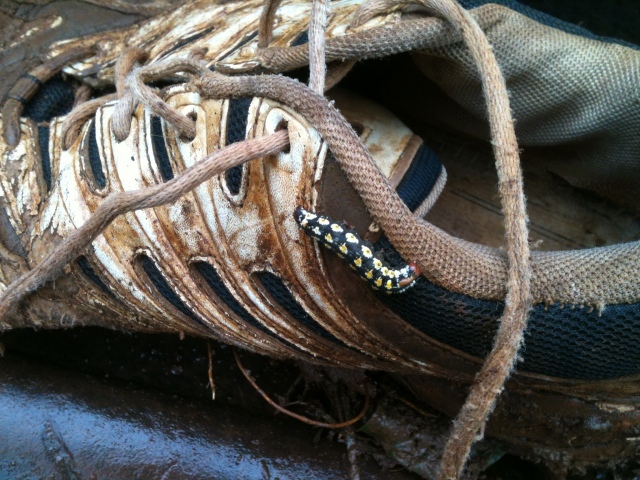 This final category is creepy as well. The centipedes are rare but scary, gyrating across your floor out of nowhere very fast. We kill them ASAP. We even heard of one that’s dangerous, that hisses by clapping its antennae together. Very creepy. We’ve only seen two of those, and not for long, before they were no more. 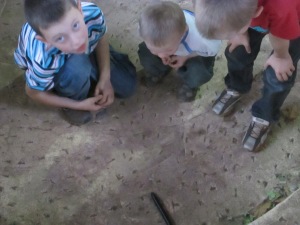 The biggest millipede I’ve ever seen.

Millipedes are more common. They’re slower, lumbering across the grass or floor. If you touch them, they curl up into balls, and if you scare them or try to smush them, they leave a brown liquid trail behind them. The Africans won’t play with them either, and an Afrikaner (linked in the story at the top) told me that she’d heard they were poisonous. I’m not sure whether to believe that or not, but I don’t let the kids touch them now.

I have become an amateur naturalist, trying to identify flora and fauna around here. I hope you enjoyed learning about the less loveable kinds. 🙂

I'm Amy, a missionary wife and mother of four children, blogging about our lives and perspectives on culture in South Africa.
View all posts by Amy →
This entry was posted in Missional Monday and tagged an African naturalist, ita vita african, Missional Monday, missionary challenges, missionary job descriptions. Bookmark the permalink.

4 Responses to The Many Jobs of a Missionary ~ Exterminator, The Slithery Kind